Magsofy – X at the City Winery

John Doe and I went on vacation together!

No, we didn’t!  But seriously…doesn’t this picture just say: “Now, here we are outside the City Winery in New York, after we just saw a show with a couple glasses of Prosecco…”  That’s exactly what is says.   The show was X, and they played “Los Angeles” (plus hits), and it was LOUD!  I had my earplugs in as deep as they could go, and the sound was not muddled.  It sounded as if I had no earplugs in, and I was listening at normal volume.  That’s how loud it was.

Also, John Doe is like, really cool, and so nice.

I told him that I am a bass player and he gave me a “high-four”, and as our fingers locked in together, I told John “may the fourth be with you.”

And then he said, “I knew you were a bass player because only bass players have a sense of humor.”

We also had a drink with the 2nd guitarist for these shows named Michael Kilpatrick who is really cool, and an excellent guitar player.   He and Billy Zoom exchanged some tasty janglies on “I Must Not Think Bad Thoughts.”  Michael is out of Alabama, and if you ever need an all around multi-instrumentalist down south, I would highly recommend him.  My gut reaction is that in addition to being a great rock’n roller; he’s an all around good guy.

The night ended with Ted joining me and KG* at the City Winery because his old buddy – the Meat Puppets manager – was at the show, too!

Set Highlights From the Show:

– “I Must Not Think Bad Thoughts”

– “Dancing with Tears in My Eyes”

The last tune of the night! 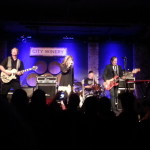